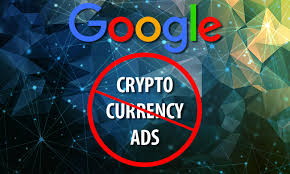 There have been talks about the reason behind this strong step by Google. Scott Spencer, Google Ad Executive, while speaking with CNBC mentioned that is more of a precautionary measure. While all sorts of dealings with cryptocurrency have not been legally banned across the globe, Spencer mentioned that the option is extremely volatile and there is no saying as to where cryptocurrency will stand at a future point of time. Since many investors have suffered after investing in cryptocurrency, Google has decided to take the matter seriously and prevent all sorts of advertisements keeping in mind the safety of the users.

What are the implications now that Google bans cryptocurrency ads?

It needs to be kept in mind that the ban does not go into effect until June 2018 and the complete implication is yet to be seen. However, the cryptocurrency price has already dropped below $9000, though the fact that the Government of India has termed cryptocurrency as illegal in India might have been one of the factors behind the fall in the price. There had been a similar drop previous year as well when Facebook announced its policy.

As for the traders in cryptocurrency, this merely seems like a temporary setback. There were deliberate uses of wrong spelling in the Ad content to bypass the ban on the advertisements of cryptocurrency by Facebook. Google mentioned that they are working on tackling that issue as well. At the moment it is difficult to say how much the cryptocurrency market will be hit after this decision.

Right now it is advisable to stay away from the cryptocurrency market unless one is a risk taker and would not mind losing the investment is things go south. The market is extremely volatile and Governments across the world are trying to draw up strict policies on the matter. For those who are new to the subject, it is better to check out what is cryptocurrency. Also, it is best to check the legal aspects of the country. The fact that Google bans cryptocurrency ads merely means that it will not show up on the search engine after the ban is implemented. Cryptocurrency is still not out of the market.

Make The World A Better Place Through Content Marketing & Editing

Here are some mind-blowing facts about YouTube. YouTube has a whopping 1.3 billion users. Every minute 300 hours of video are uploaded to YouTube. Over 5 billion videos are accessed daily by more than 30 million unique visitors. But, how can it help you earn money from YouTube? We reveal the secret! A guide […]